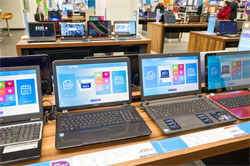 A couple of months ago, I went to a Currys/PC World store (for those of you who are unfamiliar with the brand, it is a British electrical retailer) to pick up a vacuum cleaner I reserved online (I needed it quickly, therefore I didn’t want to wait for home delivery).

The quite spacious store was almost empty of customers and a lot of sales people were wandering around doing nothing. Before going to pick up my order, I decided to have a quick look at some laptops they had on display.

While heading to the laptops section, a salesman stopped me and asked me if I needed help with anything. I didn’t. While checking out a few laptops, two other salesmen asked me the same. I still didn’t. After a few minutes, I tried to find out where I could pick my item from. There was no sign indicating where I had to go, so I asked a salesman who was not very sure, but showed me a queue of 5–6 people. It was the “customer services” desk.

I quickly noticed that everyone in that queue had items they had a problem with and wanted to return or fix. There were only two people serving that queue, so it was moving extremely slowly. After a few minutes, I asked a saleswoman if I was standing in the right queue for what I came for. She asked me what kind of item I reserved, and assured me that I was waiting in the right place (since they had to bring it from the warehouse).

After about 20 more minutes which felt like a couple of hours, ​it was finally my turn to be served. After explaining what I was waiting for and that the sales staff told me to wait there, the guy on the desk just turned me away, telling me that they only deal with “large items” and I should go to one of the checkout tills… ​Since he didn’t even apologise for the delay, ​​I ​expressed how unhappy I was since I had been waiting 20–25 minutes without any reason​, and headed for the till.

After waiting there for a little bit and after I was told that I should have gone to the customer services desk (no further comments on that), they ended up finding my order and sent someone to the warehouse to pick it up. I paid and left, but forgot to ask if any bags were included in the package. I went back (with the item in hand) and asked about it at the same till.

The person there assured me that it did, since (quoting her) “the features list of the vacuum mentions bags, so that means that it has bags inside”. I decided not to explain to her that this is not what it means, so I just went to my car opened the box there, confirmed that there were no bags in it, and went back to buy some.

When I went to pay, there were 6–7 people waiting in the only open till at that point. I looked around and noticed that most of the sales persons were sitting idle in random corridors, waiting for the next customer to appear; probably they were not allowed (or trained) to operate a till. The process in the tills was too slow that literally two of the people in front of me in the queue left the stuff they had decided to buy and left the store.

I paid and left, praying that the vacuum cleaner won’t break within its warranty period, and I won’t have to go back to that place ever again!