My first time using an iPad — Expectations vs Reality 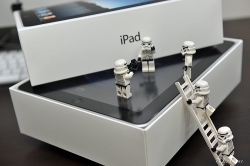 The first time I used an Apple product was for a whole semester in the early ‘00s, when I was an undergraduate student. The product was an iMac G3, and although it’s been quite some time to remember the details, I have a vivid memory that I didn’t like the whole experience. Although I don’t consider myself an Apple hater (I’ve even read Steve Jobs’ biography :P), ever since I consciously decided to stay away from Apple products; no iPhones, no iMacs, no iPads, no “i’s” in general.

A few months ago, I won an iPad in a contest. My first thought was to sell it, but since I find Apple products to be overpriced and I don’t think I would ever want to spend my own money to buy one (still not a hater), I decided it was a great opportunity to use an iProduct in my daily routine. The verdict? I’ll start with the positive stuff: it is fancy and smooth to use, it has a great variety of well developed and interesting apps, its battery life seems good so far, and its keyboard is amazing.

So far so good, but to be honest, I didn’t experience that “wow” factor or the flawless user interface that every Apple fan that I know used to rave about.

Instead, while using the iPad, I found it annoying quite a few times. For example: before being able to use it for the very first time I had to spend several minutes filling in useless forms; the App Store was asking for my password three times in a row every single time I was using it (thankfully that was solved after a few restarts); I literally spent over half an hour to manage to enter my credit card details to the App Store to be able to buy an app since the non-existing error messages of the App Store didn’t help at all (I managed to finalise the process via the web interface of the iCloud-thing).

On top of that, I find the whole restrictive culture of the Apple ecosystem annoying, irritating, and any other negative adjectives you can think of. I knew this kind of “limitation” existed, but I didn’t believe that it could be that bad. Apart from the usual stuff, e.g. if you want to copy a file to your device, you have to install iTunes or host it in the cloud to be able to “sync” it, I still can’t believe that I cannot even change (without a hack) the default browser, mail client, etc. This whole experience is making me feel such a powerless user.

Anyway, I don’t want this to be a rant against Apple. Really. I even wrote the word “iTunes” before, without mentioning the word “horrible” in the same sentence!

I merely want to document my own experience of an Apple product coming from completely different ecosystems (Windows, Linux, Android), which was the complete opposite of what I expected. Don’t get me wrong; iPad is a good device, but I still find it overpriced (even ignoring the fact that the price ridiculously increases with the excuse of the storage) for the experience that it offers.

This story was originally published as part of my newsletter’s editorial and was also published on medium.