The fear of using the wrong tool 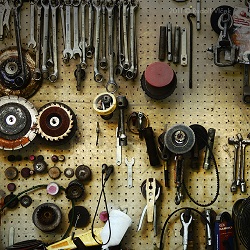 If you have been participating in any kind of community, you most likely encountered or even took part in a flame war regarding which tool to use for a specific thing. Code editors, frameworks, image manipulation tools, you name it.

Although I’m guilty of participating in such discussions in the past, I consciously stay out of them for several years now. That decision mostly stems from my belief that the best tool for a job is usually quite subjective.

I do like to mention the tools I use (as I occasionally do in this blog or on my newsletter) and read what other people prefer to use, but I don’t get dragged into arguments about which one is better.

This is what I tell people when I find myself involved in such discussions:

Use whatever you feel comfortable with. When you want to experiment, do it by all means, but don’t feel bad and obliged to use the new “hot” thing in the industry if you still can do the job quickly, efficiently, and with the same quality with the tools you are already familiar with.

In the bottom line, tools only matter to us, the engineers. The end users have no idea of the mechanics of how something was built and they don’t care about them; they only perceive the end result.

This story was originally published as part of my newsletter’s editorial.