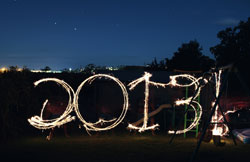 Last year, for the first time, I wrote a new year’s resolution; just a small list of things which I would like to complete in 2013, from a professional point of view.

Since I went over it a few times during the past year to check how I was progressing, I thought it would be nice to go through the list in a blog post as well before writing my new year’s resolution for 2014.

I have to say that it was a quite interesting year. I’ll be back in a few days, with my new list. :)