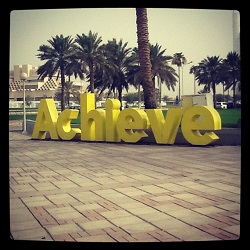 Although last year I wrote my new year’s resolutions, after reading a lot of other people’s resolutions during the last month I was convinced that I used the wrong term. Don’t get me wrong, but it looks like the term “resolution” is mostly used for things that someone wouldn’t normally do and is trying to convince and motivate him/herself to do them, only because a new year is approaching.

In my opinion, if you are not already motivated or interested in doing something, the chances are that after a couple of weeks you will forget about your resolutions and go on with your normal routine.

From my point of view, resolutions should be (mostly) feasible goals. This is how I approached my “resolutions” last year anyway and actually achieved many of them. All of them were goals that I was already motivated and interested to achieve, so the list actually just acted as a reminder (since there are a lot of things I like to be involved in).

It was also interesting and fun when I went back to them at the end of the year to check which of them I actually accomplished.

This is going to be a transitional year for me (for several reasons), so it’s difficult to make a list of goals without knowing if I’m going to have time to work on them, but I’m going to do it anyway just for the fun of getting back to them at the end of the year!

Off to another creative and productive year. :)